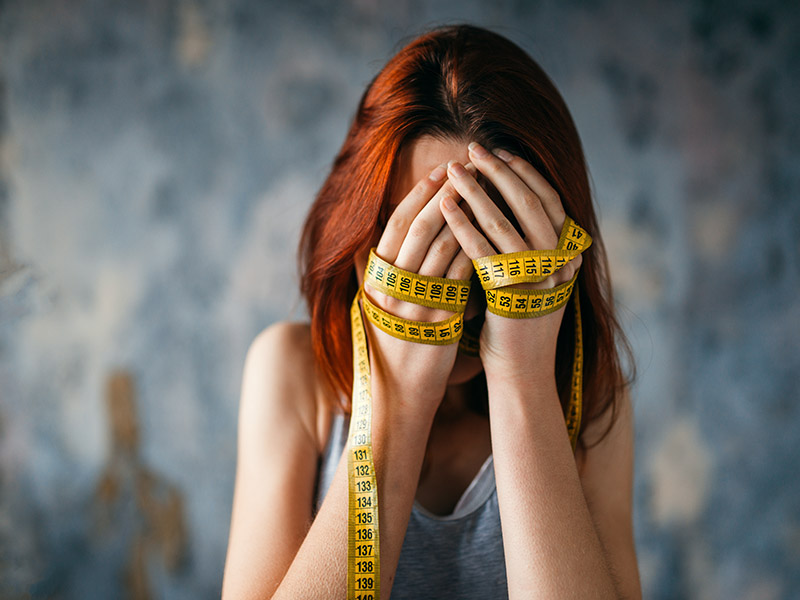 Instagram star Alexis Ren, recently opened up to Cosmopolitan about her battle with anorexia, which she says she hid for years. In April, the 20-year old model started tweeting about her mental state, saying that she was ‘in a toxic state of mind’, ‘suffering from food guilt’ and would overexercise as a way to punish herself. She says these tweets reveal that the happy pictures on her Instagram profile masked the truth.

“I would look at my profile and think, ‘Look at this girl! She has the most perfect life!’ and I would feel so guilty for not feeling blessed all the time.”

Ren says she is now an advocate for educating young girls about the fact that the images they see on social media do not show the whole truth. This is an important step in raising awareness regarding eating disorders.

“Looking up to girls for ‘inspo’ is a beautiful thing, but comparing yourself is what creates anxiety and self-hatred. It’s really important that young girls know the difference.”

What Lead To Her an Eating Disorder?

Alexis was 17 when she lost her mother to breast cancer. The two were very close and her mother’s death left Alexis feeling like she needed to live for both of them. When she turned 18, she went to Australia for several months to further her modelling career. Whilst abroad she picked up some weight, a fact her modelling agency was quick to point out on her return to Los Angeles.

“They said, ‘You did gain weight and if you could start working out a little bit more…’” she says, trailing off. “I just felt so out of control.”

She started doing things she knew she shouldn’t be doing, such as dieting and overexercising. “I felt bad because I knew I was letting my mom down by doing everything that she wouldn’t have wanted me to do.” But, it would be a while before she started on her journey to recovery.

Ren and Jay Alvarrez started dating around the time she developed her eating disorder. A well-known model and music producer. Alvarrez managed both of their careers during their two year relationship. In retrospect, Ren shares that she was attempting to replace her mother with another person.

“Which obviously doesn’t work out, especially when you’re young and you put your faith into a person who has different intentions,” she says.

He booked them modelling jobs in exotic locations. And finally, landing them the opportunity to film YouTube lifestyle videos. Though one of these projects, a highlight reel of their summer received more than 22 million views. It forced Ren to be on camera constantly.

“I was my worst critic ever,” she says. “The only sense of relief I had was to be able to monitor my eating and my workouts. Everyone around me was like, “Alexis, what are you doing?’. But I felt like my body was the only reason why people liked me.”

Ren shares that it was only after she and Alvarrez broke up that she began listening to the concerns of her friends and family.

“I just got to the point where I was like, ‘OK, I’ve got to change because this is not working.’” She also felt a responsibility to her fans to start practicing healthy habits and become someone worth looking up to.

So, she took a break from traveling for eight months. Her godmother, Joni Lerner, a life coach who’d been close with Alexis’s mother, introduced her to Maggie Tanielian, a certified personal trainer and health nutritional coach.

Slowly the two worked through her food guilt until she got back to a healthy mindset. Now, Ren exercises every second day and is no longer obsessive about it. She also enjoys a well rounded diet and has put on several pounds – something she has learnt to embrace. “It scared me at first, but I had the right people around me.”

Eating Disorders – Here’s What You Need To Know

Interestingly enough, another fatal eating disorder that is gaining rapid recognition is Diabulimia. Where individuals who suffer from diabetes withhold their insulin to manipulate their own weight.

What Are The Consequences of Anorexia Nervosa?

There are a number of negative health concerns that occur as a result of the weight control habits of individuals with AN and BN.

She adds that there are also gastro-intestinal complications, such as; delayed emptying of the stomach, less small intestine movement, and constipation. Bone loss also occurs often and early in the course of the illness. To the extent that these individuals have a bone mineral density consistent with osteopenia or even osteoporosis. AN has also been shown to result in lack of menstruation.

“If AN occurs in childhood and adolescents, the medical complications can also include growth retardation and structural abnormalities in the brain,” Drummond explains.

What About Bulimia Nervosa?

The clinical signs and symptoms of BN are more difficult to detect, as these individuals can have a normal weight and hide their behaviour.

“When vomiting occurs, there may be scarring of the hand used to cause a gag reflex, there may also be erosion of teeth enamel and increased dental caries as a result of frequently having stomach acid in the mouth.”

“Chronic vomiting can also result in dehydration and changes in the body’s acid base balance. A sore throat, inflammation of the oesophagus, vomiting of blood and abdominal pain can also be experienced. More serious gastrointestinal complications such as tearing of rupturing of the stomach or oesophagus can also occur.”

She adds that there are specific complications associated with the use of laxatives, diuretics and other substances, which also include a negative effect on heart function. BN has also been show to result in menstrual irregularities.
Why Do Certain People Develop Eating Disorders, When Others Don’t?

Yochi Ress, a clinical psychologist, elaborates, “Eating is such a basic and fundamental human need, but it is also one that is heavily coloured and shaped with complex and invisible layers of cultural, religious and other influences and conditioning.”

He explains that, psychologically, eating fundamentally involves a component of self-soothing or emotional nourishment. As well as a being a way of taking control over our life. Providing some structure and regularity, which can promote feelings of safety.

“All of us at one time or another will either eat a lot more or less when we are highly stressed, anxious and vulnerable. But what causes a relatively more innocuous pattern like that to shift into very dangerous territory like Anorexia or Bulimia? Well, it is usually the result of a complex interplay of factors, which could include: personality, early life-experiences, major current stresses (usually in the family and/or school system and often in relation to parents and authority) and very importantly, cultural lenses which would mediate all of the other categories.”
How Do You Treat Eating Disorders?

The nature of the damage will determine whether it is reversible or not. Treatment involves a multi-disciplinary approach, “using both psychological management therapies and nutrition rehabilitation and counseling,” Drummond explains.

How Can You Help Yourself?

Ress shares, “If one is officially diagnosed with the condition of Anorexia by a competent and appropriately qualified mental-health professional. Then the best way that you can help yourself is to ensure that you receive the appropriate length and level of specialised care and intervention.”
He adds that eating disorders are highly complex and notoriously difficult to treat. However, there are several clinics and mental health professionals who do specialise in these conditions.
“Another important way that you can help yourself is to not be overly self-critical and beat yourself up over the fact that you have this challenge.”
A very empowering technique that can help you gain some kind of hold over the situation, is to start journaling (as a mindfulness technique).
Ress elaborates, “This helps to observe and interrogate your internal narratives and beliefs around yourself and around eating. This can enable you to become more conscious of what triggers you into certain eating patterns, and show you how distorted, false and limiting many of those mental ‘scripts’ or programs can actually be.”
If you have an eating disorder, you are not alone – and you are never too old to ask for help. It is not exclusive to teenagers, or women. Taking that first step towards recovery will do wonders for your health and your self esteem.

How Can You Help Your Loved One

Ress shares that the most important thing you can do to help someone who has an eating disorder is to be non-judgmental, nurturing and supportive. “You should encourage them and ensure that the person gets the right level of treatment. People with such a condition often have a very low self-esteem, and so it is important to be mindful to the fact that they can be particularly sensitive to criticism, even if well meant.”

He adds that you should make sure to check carefully with the professional or centre involved regarding the exact treatment approach and design before leaving your loved one in their care.